Our Beloved Father & Founder of the Munshi Hospitals Dr. Praful Munshi was born in 1914. A self made man lost his father at an age of only four years. With extreme struggle and hard work he created his own path from Junagadh to Ahmedabad and from Ahmedabad to KEM Hospital Mumbai. His willingness to change the destiny achieved a milestone in 1942 when he completed his Post Graduation and was awarded with the degree of M D in Obstetrics and Gynecology. He returned back to Ahmedabad as one of the very few trained postgraduate gynecologists in the state. 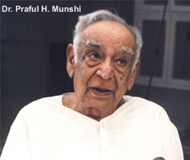 With only motto of serving the society he started his practice under guidance and support of his maternal uncle. Jitubhai Desai at Khadia and soon in Sankadisheri in 1945.
In new Ahmedabad across the river he owned his very first small clinic in Pritamnagar society. 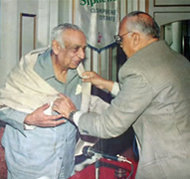 A giant leap in the field of Obstetrics and Gynecology was his new venture at 50 Pritamnagar Society, the New building of Munshi Hospital (yr 1960).It was first of its kind in this part of Ahmedabad with all facilities under one roof. With an unbiased aim of sering the society he was attached to hospitals like V S Municipal General Hospital (yrs 1945-54), Gulabbai Trust Hospital (yr 1955) and L G Hospital (yrs 1954-1972). He retired from academic activity at the age of 60 years but continued his clinical work at his private clinic and help many others private practitioners by providing right guidance till very late in his active life.

As a family we are proud to announce that even the third Generation in form of Dr. Sujal Munshi and Dr. Ami Munshi have recently joined us for our practice and further expanded the horizons to endoscopy and Infertility practice.

We are eagerly waiting for Dr. Abhijeet Munshi, Dr Rajita & Ms Devangi to join the profession
who are presently doing their medical post graduation and graduation respectively.